A top female bodybuilder was arrested after being caught in a police prostitution sting.

Rhonda Lee Quaresma,a former Canadian national champion and a member of the International Federation of Bodybuilders, was arrested by police in Florida.

The 42-year-old had advertised her services under the name of ‘Miss Sparkle’.

According to an arrest report, police had made contact with her after finding her details on a website.

Quaresma allegedly agreed to sex in exchange for a $280 per hour ‘donation’ after an undercover officer met her at a motel in Bonita Springs, Florida.

The deputy arrived and was met by a woman wearing pink lingerie.

He was asked to place ‘the donation’ on a table. He put $200 down and she allegedly reached over and grabbed his genitals.

He asked if she had condoms, and she pointed to a night stand which had a magnum condom and lubricant on it.

After some discussion about sex acts, the deputy gave a pre-arranged signal to uniformed deputies and she was arrested. 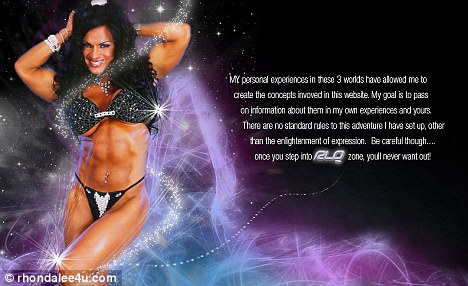 Website: Posting provocative pictures of herself she writes that she is ‘physical, musical and sensual’ and boasts she can squat lift 315lbs

Prostitution: Quaresma is a former Canadian national champion who advertised herself under the name ‘Miss Sparkle’ when she was arrested in Florida

Quaresma,from Toronto,Canada, has been charged with one count of prostitution and released on bond.

The 5-foot-1 bodybuilder’s career peaked in 1995 when she placed first in the Canadian National Bodybuilding Championships and earned her IFBB professional certification.

Quaresma’s biography on her website describes her as a personal trainer, model and entertainer.

She also writes she is ‘physical, musical and sensual’ and boasts she can squat lift 315lbs.

Her site also includes shots of her showing off her bulging biceps in revealing outfits and says: ‘I am a sensual being and I have been lucky enough to be able to express it.

‘An interesting side effect of woman’s pro and top level bodybuilding because we aren’t paid like other top sports are, is that we learn to become businesswomen among things!’

This entry was posted
on Wednesday, March 16th, 2011 at 7:45 pm and is filed under FEMALE BODYBUILDING, NEWS.
You can follow any responses to this entry through the RSS 2.0 feed.

You can leave a response, or trackback from your own site.

The Food Items To Be Eaten During Post-Workout Sessions!

It is very difficult to find a workout program you could fit into. This is the…

The Food Items To Be Eaten During Post-Workout Sessions!

Multiple sclerosis (MS) is a chronic, degenerative disease of the central nervous system (CNS) that is…

Procedures Of Muscle Biopsy – Is There Any Risk In It?

Muscle biopsy is a minor surgical procedure performed to diagnose disease involving muscle tissue. It will…